Ukraine’s efforts to completely and rapidly modernize its military in order to deter Russia come at a cost of billions of dollars – well beyond its means.

President Volodymyr Zelensky’s administration suggests, however, that foreign allies, namely the United States, could foot most of the bill.

During his last visit to the United States, Zelensky presented a $ 277 billion plan that can theoretically see Ukraine’s development boom over the next decade.

The plan calls for up to $ 25 billion and more to bolster the country’s armed forces, most of which would be covered by US defense assistance.

With this money, Zelensky wants to finally move from the uphill battle to reviving the declining Ukrainian navy and aging air force, and much more.

Experts believe that despite the high costs, such an ambitious plan is still possible – and basically the only way for Ukraine to truly rearm itself in the foreseeable future.

But the key question is whether Ukraine would be able to make good use of such a generous donation.

Before securing additional billions for modern fighter jets, the country’s defense sector still has to overcome its overwhelming bureaucracy and poor funding.

Zelensky presented his program on August 31 at the Fred W. Smith National Library in Washington, DC, to an audience of representatives of leading US think tanks and journalists.

Entitled “Greater Justice and Opportunity – Building a Prosperous and Resilient Ukraine”, it was summarized the next day on Zelensky’s official website. But more details have emerged in the media.

The plan envisions nearly 80 different projects in infrastructure, transport, energy and agriculture over the next 5-10 years. The total value – $ 277 billion – is actually double the amount of Ukraine’s annual domestic product in 2020, almost five times its annual state budget.

Ukrainian soldiers speak in the front line trenches during a lull in fighting near the town of Zhovanka in the Donbas war zone in eastern Ukraine on April 28, 2021.

According to the plan, Ukraine will cover the costs of budget financing, but also seek international aid, loans and investments.

The result should be a Ukraine which is a major “digital, infrastructural and agrarian hub” of Europe, “a vanguard of security” – and, most importantly, “the most reliable US ally in the region”.

The program calls for Ukraine to strengthen NATO’s southern flank against the Russian threat.

The project includes a long list of purchases that, according to the concept, can be covered primarily by US programs, loans and investments of Foreign Military Financing (FMF) and Surplus Defense Items (EDA).

First, Zelensky wants to ask donors for $ 4.3 billion to bolster Ukraine’s naval power, which currently consists of a handful of obsolete warships. The program includes the acquisition of new ships, minesweepers and surveillance planes, as well as the construction of new naval bases.

On the ground forces side, the objective is to improve its artillery reconnaissance, often cited as Ukraine’s weak point, and to obtain more short and medium range missile systems and counter radars. drums.

The price tag is $ 6.1 billion, of which $ 3.3 billion is expected to be received through â€œinternational supportâ€.

The Ukrainian Air Force is predicted to be the biggest potential beneficiary, involving $ 14 billion, of which $ 13.5 billion comes from abroad.

The administration wants to buy new jets, drones and helicopters to replace Ukraine’s Soviet-era air fleet, whose operational capacity, according to military authorities, will become obsolete by the 2030s.

The proposed spending corresponds to a roadmap for modernizing the Air Force by 2035, according to which the military command recommended allocating at least 320 billion HR ($ 12 billion) over the years. Next 15 years to preserve Ukraine’s air power.

The plan also wants the international community to allocate 157 million dollars to allow Ukraine to set up a scientific center for research on “people affected by unknown gases”.

It is not clear what the research would consist of. The Defense Ministry did not respond to the Kyiv Post’s request for an explanation.

In general, the military component alone amounts to almost $ 25 billion, of which Ukraine itself is ready to allocate almost $ 4 billion.

According to the plan, it would take Ukraine around 30 years to implement the projects. With international help, they could be completed by 2025.

Experts consider the proposed allocations to be excessively unrealistic. However, the United States already has multibillion-dollar programs in place to help its major allies strengthen their armies.

The most obvious example is Afghanistan, where the United States has spent nearly $ 86 billion on security and defense, although the 20-year effort has been in vain.

Ukraine in turn has consumed nearly $ 2 billion in US security assistance so far since the outbreak of the war in Russia in 2014.

This includes obtaining shelved US military equipment at no cost to Ukraine, such as the reinstatement of five Island-class patrol vessels, two of which already fly the Ukrainian flag.

Zelensky’s plan, meanwhile, offers aid programs on a much larger scale. And this is where Ukrainian leaders often struggle to follow.

Although recently increased, the budget of the Ukrainian Defense Ministry for 2022 is currently expected to reach 131 billion HR ($ 4.9 billion), which is nevertheless only 55% of what the military had. asked the government.

Even though this is a new record, only 33 billion HR ($ 1.2 billion) will be allocated to the armaments and materiel of the armed forces.

â€œIt is very rare for a recipient country to get ready-to-use aid materials free of charge,â€ says Chmut.

â€œIf you get used planes, you get them as they are. Transport, repairs, modernization, maintenance, personnel training, ammunition, etc. are charged to your country’s budget. It means millions and millions of dollars, â€he says. 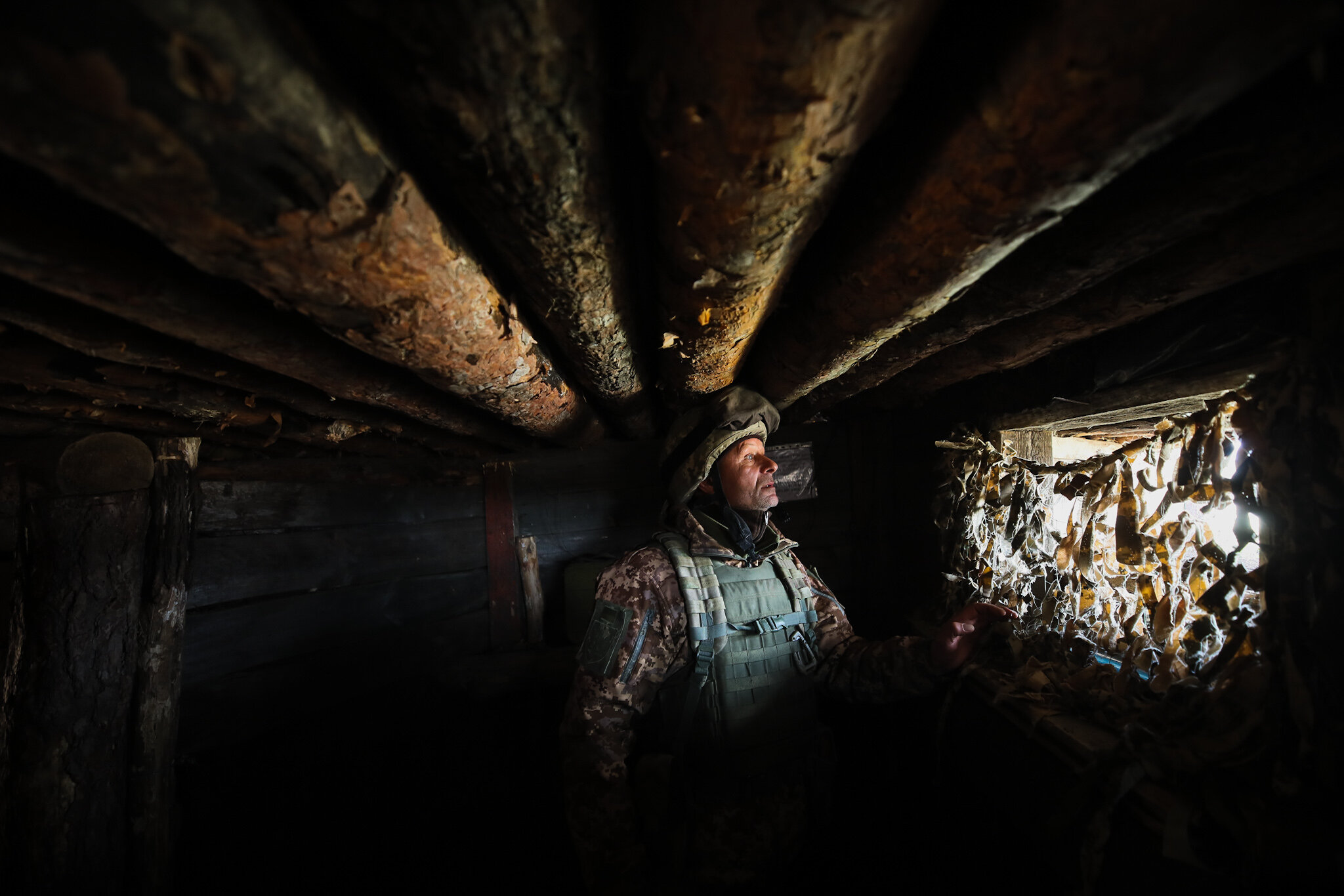 A Ukrainian soldier from the 10th Mechanized Infantry Brigade occupies a position near the town of Zhovanka, located on the Donbas war front, on April 28, 2021. (Volodymyr Petrov)

In the case of the Island-class boats, even if they were provided free of charge, Kiev nevertheless had to spend more than 10 million dollars to integrate the first two into its navy in early 2020. Three more ships are expected by the end of 2020. end of 2021.

The handing over of the Island-class boats also revealed serious organizational problems within the Ukrainian administration.

It took more than three years of bureaucratic ping-pong in Kiev to finally come to a political decision on obtaining the ships. The process was stalled even though the Ukrainian navy, distressed by Russia’s occupation of Crimea, was in desperate need of resupply.

â€œAnd then it took longer to get three more than we expect this year,â€ says Chmut.

â€œAnd this whole process constantly comes up against many problems on the Ukrainian side. Sometimes we have trouble finding crew members; we don’t have a base to deploy them; we cannot decide how to modernize them; and we are running out of money to buy American-made equipment from them.

The United States is typically gradually moving from small aid projects to large multi-billion dollar programs. To be able to continue to receive Western aid, Ukraine must be much more efficient in its use, according to the expert.

“But while we still find it difficult to get a 168 ton boat, the United States is not going to talk about anything bigger.”

Found a spelling mistake? Let us know – highlight it and press Ctrl + Enter.