The Ukrainian army is much stronger and better prepared than in 2014, when it could not resist Russia’s annexation of Crimea. But a shortage of arms from the West and insufficient spending in the country left its troops without even the large stocks of basic supplies they would need in a high-intensity conflict.

Instead, as the United States and Europe dread a possible invasion by President Vladimir Putin, Ukraine sees its army overshadowed by Russian forces and its purchasing power. The Russian president has maintained his latest buildup of troops at the border, saying the North Atlantic Treaty Organization must reduce its presence in the region.

In the event of war, only a massive influx of sophisticated weapons from Western donors to Kiev could ensure its defense. So far, its requests for expensive items like air defense and missile defense systems have gone unanswered despite assurances that “NATO stands by Ukraine”.

The United States has put in place a new package including Javelin anti-tank missiles, small arms, medical kits and bulletproof vests, sticking to defensive weapons and supporting Ukraine’s cyber capabilities in the aim of helping Kiev without giving Putin an excuse to act, people familiar with the talks adding that President Joe Biden has endorsed the plan. National Security Council spokespersons did not immediately comment.

At home, in the meantime, the money is lacking. Some funds raised from taxpayers for defense are spent elsewhere, while waste and corruption still take their toll after years of attempted reform.

Kiev’s defense procurement budget was 23 billion hryvnia ($ 838 million) for 2021, rising to 28 billion hryvnia for 2022. This is a big increase from 2014, but still a significant increase. rounding error compared to what the Kremlin announced. According to the Stockholm International Peace Research Institute, Russia spends around 40% of its defense budget of over $ 60 billion on purchases, twice as much in absolute terms as France, Germany or the United States. UK, not to mention Ukraine. 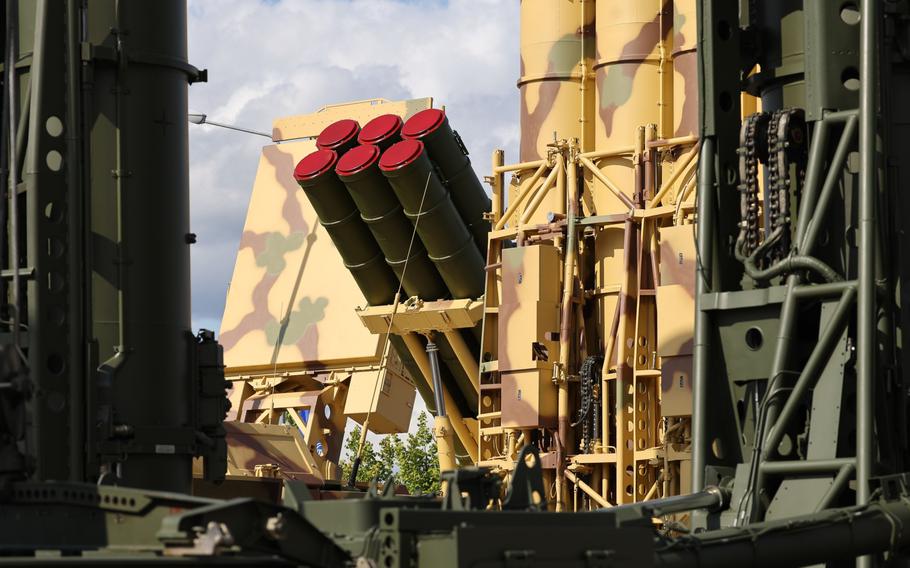 An anti-aircraft missile system at the Army 2021 exhibition in Moscow in August. (Andrey Rudakov / Bloomberg)

All workers in Ukraine have to pay a special tax, sold as a way to increase defense spending. In 2021, this raised 28.6 billion hryvnia, enough in theory to double arms purchases. Yet the money goes into the general tax fund. A spokesperson for the finance ministry said it was “impossible” to know if it was being spent on defense, health or other priorities.

When the Defense Ministry arrived in parliament in December with its shopping list for 2022, news of the formation of Russian troops had long since fallen. But the number of bulletproof vests he wanted to buy was only half the amount needed for the current strength, not to mention the reserves that would be mobilized in the event of a Russian invasion, according to opposition MP Serhiy Rakhmanin. and member of the parliamentary committee. on national security, defense and intelligence.

Due to a lack of funds, there were also not enough rifles or helmets on the list, said Rakhmanin, a former journalist who has criticized President Volodymyr Zelenskiy and his government as a lawmaker. There was, however, a demand for remarkably expensive waffle napkins and Soviet-era radiation detection equipment that are no longer of obvious use.

“I had a question: OK, let’s say the war starts tomorrow, do you really need that stuff? Rakhmanine said. Towels and detectors were removed from the list.

The Defense Ministry has pledged to improve its procedures, blaming procurement delays on bureaucracy and promising to cut classified contracts to reduce corruption. Multiple requests for responses to Rakhmanin’s claims have elicited no comment.

The National Security and Defense Council also said at the end of December that the government would set up an inter-agency task force to verify the army’s supply of arms and food during the period 2017-2021.

The military has nevertheless made progress over the past seven years. In 2014, it could only put into action a fraction of a nominal force of 120,000 soldiers, with battle tanks put on hold, major air defenses inoperative and only four MiG-29 aircraft out of a fleet of 46 able-bodied. to steal, according to Mykola Bielieskov, a defense analyst at the National Institute for Strategic Studies, a think tank attached to the Ukrainian presidency.

Today Ukraine is capable of deploying the majority of its 205,000 active troops, as well as functional, albeit often old, equipment, Bielieskov explains. Its arms industry inherited from the USSR developed new missiles, surveillance drones and anti-artillery capabilities guided by radar.

The problem is, the government hasn’t bought enough of its own new weapons to take on Russia.

â€œIs Ukraine ready to fight? Yes and no, because Ukraine did not start this war, â€Hanna Shelest, editor-in-chief of Ukraine Analytica in Odessa, told a US Council on Foreign Relations webcast last month. She was referring to the conflict with the armed Russian separatists that the Ukrainian army has been fighting in the eastern Donbass region since the annexation of Crimea.

At the same time, Shelest said, the country’s institutions, military and people are now much better prepared in case Putin decides to step up.

It is still unclear what Putin’s intentions are, as he simultaneously pursues diplomatic negotiations with Biden and a military build-up. He has repeatedly denied that he currently plans to invade.

Russia’s massive deployment is costly and difficult to sustain for long. At the same time, Putin’s list of diplomatic demands is so long that it could take months, if not years, to negotiate, according to Michael Kofman, director of the research program at the NAC, a Virginia-based think tank.

“It is clear now that the Russians do not think they will suffer devastating losses,” he said.

In any operation, Russia could first use its technological advantages to neutralize the Ukrainian army from a distance, wiping out its air force, runways, air defenses, ammunition depots and command and control systems in a dam. to which Ukraine would have little or no response, according to Kofman and others.

Ukrainian troops may have little chance of using their much-vaunted US Javelin anti-tank weapons and armed drones recently acquired from NATO member Turkey before a punitive settlement is imposed.

“The Ukrainians know how to fight, but they don’t have the equipment, especially for deep operations,” Bielieskov said. “The Russians have Iskander (ballistic) missiles, electronic warfare, last generation planes and all that stuff.”

Visiting Washington in November, Defense Minister Oleksiy Reznikov said he had requested the high-end equipment Ukraine would need to start correcting the imbalance. Yet American missile and air defense systems would be difficult to transport and quickly integrate for use in Ukraine, even if a political decision were made that America was so deeply involved in a potential conflict with Russia.

The United States says it has provided $ 2.5 billion in military aid to Ukraine since 2014, but it was designed to contain militants in eastern Ukraine, rather than a full Russian invasion.

Other NATO countries have also provided aid and training, but Zelenskiy accused Germany of preventing the alliance as a whole from providing more weapons. Germany, Netherlands say as long as there is a threat of conflict with Russia, NATO should not give Ukraine lethal weapons, Deputy Prime Minister told Interfax-Ukraine on Tuesday. Minister responsible for European and Euro-Atlantic integration Olha Stefanishyna.

Estonia plans to supply howitzers and Javelin missiles, mainly for anti-tank defense, the ERR press service reported last week. This would require authorization from the United States, Germany and Finland, the country of origin of the equipment. The Biden administration is supportive of the idea in principle, according to a person familiar with the thinking of the administration.

Additional shoulder-fired anti-aircraft weapons would be a more pragmatic request than Patriot batteries, according to Bielieskov. These require little training and would allow troops to counter Russian gunships and force its attack planes to fly at higher altitudes, reducing their effectiveness and helping Ukrainian forces survive bombardment.

But for Glen Grant, a retired British artillery officer and former adviser to the Ukrainian parliament on military reform, officials must focus on basic supplies – building up the shortage of food, ammunition and light transport. .

â€œThe numbers don’t matter much, it’s the ability to put troops in the right place with the right equipment at the right time that is vital,â€ said Grant, now senior expert at the Baltic Security Foundation from Latvia. “The burn rate in a major war is enormous, it will eclipse anything that happened in 2014.”

Bloomberg’s Alberto Nardelli and Jennifer Jacobs contributed to this report.