The countries of the European Union are advanced in terms of setting up and launching capacities for the production of electrical energy from renewable sources. The need to switch to the use of renewable energy sources is becoming more urgent every year. These sources are becoming more and more affordable. In particular, the cost of 1 kWh of energy from onshore wind farms in the EU is equal to the cost of energy produced by coal-fired power plants. The share of energy produced from renewable sources in the European Union is 32% and reaches 50% in some countries.

Ukraine is also seeking to increase the share of electricity produced from renewable sources in the domestic market and the provision of export services. The country has the necessary production, personnel and technical potential. In particular, this is discussed in an interview with Yuriy Potiyko, a leading specialist of Duglas Alliance LTD, on winning the competition for the construction of the largest hydroelectric power station in Equatorial Guinea.

Despite the decline of domestic industrial production and deindustrialisation, in Ukraine there are companies and specialists that implement large-scale investment projects abroad and strengthen their positions in emerging markets. DUGLAS ALLIANCE LTD. Company, which includes Ukrainians in the management and engineering headquarters, won the competition and built the largest hydroelectric power station in Equatorial Guinea, conducts studies of African specialists in Ukrainian universities, makes plans for the future and is ready to be a guide to the interests of Ukrainian companies on the African continent. Learn about the characteristics of working in Africa and the prospects for Ukrainian companies to expand abroad in our interview with the Managing Director of DUGLAS ALLIANCE LTD., Emeritus Economist of Ukraine Yuriy Potiyko.

The company started its work in 2009. In fact, we have combined the main research and development institutes and the manufacturers of hydroelectric equipment into one alliance. Before that, we were the driving force behind a dozen different organizations, each with enormous long-term (50-70 years) experience in hydropower, as well as specialists who have dozens of large-scale projects at worldwide. Our engineers and builders worked on the creation of projects such as the CHE of Kan Don and the CHE of Nam Chien in Vietnam, the CHE Deriner in Turkey, the CHE of Shulbinsk and Bukhtarma in Kazakhstan, ensured the operation of our CHE Dnipro-2, and developed the design and working documentation for power plants in Ukraine, Belarus, Vietnam, Turkey and Georgia.

Currently, our partners are already more than 100 different companies from Africa, Asia, Europe and America, the interaction of which ensures a complete cycle in the construction of hydropower plants. Our offices are located in London, Tallinn, Malabo and Bata, and of course in Kiev. The main directions of our work in the world are construction project management, engineering services, design and study work, industrial construction, trade in construction materials and special equipment.

In 2011, we announced ourselves by winning a tender for the construction of a hydroelectric power station in the Republic of Equatorial Guinea on the Vele river in the region of the village of Sendje. In addition to us, companies from China, Canada, Cameroon and Russia participated in the tender, but our proposal was the most attractive to the government of the republic.

Mainland Equatorial Guinea is experiencing a severe power shortage. Today, production only provides 20-30% of total demand. This creates serious restrictions for the development of industrial production, mining, production and processing of agricultural products. At the same time, the continent has full-flowing rivers, which allow hydropower plants to be built and generate up to 1,500 MW of their own energy. Guinean authorities have repeatedly called on companies and the diplomatic corps of other countries during the 2000s to conduct research on local rivers for the construction of several hydropower plants with a nominal capacity of at least 150 MW. . 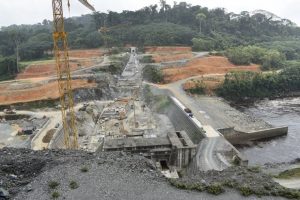 The canal is part of the dam of the “Sendje” hydroelectric power station.

One of the main conditions of the contract was the construction of a hydroelectric power station on the Vele river, which would have a capacity of 120-200 MW and could operate not only during the rainy season, but also supply at least 50% of the capacity in the dry season, in addition, hydroelectric equipment must be adapted to operate in tropical climates. We were able to ensure compliance with these conditions, as well as organize training for Guinean students in major universities specializing in industrial construction and energy. By the way, an international educational project with the participation of Ukrainian universities and students from Equatorial Guinea is working to this day. After summing up the competition, in January 2011 a contract was signed.

– What are the main challenges of DUGLAS ALLIANCE LTD. encountered during the implementation of the Sendje hydropower plant project?

The project was to be implemented, which is called “from scratch”. And it’s not in ours, but in the African sense of the word, when almost all the basic infrastructure is lacking and large-scale construction has to be deployed in the middle of the jungle.

We were also faced with a significant lack of input data, since topographic, geological and hydrological studies in a given region, in fact, were never carried out. Added to this is the lack of a local market for construction materials, the shortage of skilled labor, the lack of local manufacturers and suppliers of necessary equipment, and the shortage of construction equipment. specials. In addition to wood, stone and sand, all other resources had to be imported. But all of this was counterbalanced by the REG government’s strong will for the project to be implemented and our willingness to carry out this ambitious task.

– How did the work begin and what is the percentage of preparation for the installation now?

The investigations and the development of the project took place in two stages. First, we carried out all the baseline surveys and analyzed different options for the layout of the structures. In the second stage, there was a refinement of the design features adjusted for previously obtained data, climatic conditions, etc. 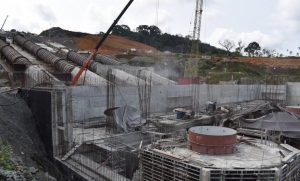 In addition, it was necessary to create a powerful production base to service the main construction, and these are several separate workshops, operating units, storage facilities, laboratories, auxiliary facilities. For these needs, it was necessary to prepare a sufficiently large territory, to lay access roads. With all these tasks, we dealt with successfully and in a timely manner.

At the end of 2019, the construction of the Sendje hydropower plant was already more than 70% complete. In addition to the work carried out on the dam, dams and other main structures of the hydroelectric power station, almost all of the necessary hydraulic and electromechanical equipment has been delivered to the power station.

– Which markets in African countries could you mark as the most promising for Ukrainian companies?

Geology, mining exploration and exploitation, water treatment, utility infrastructure, fishing industry, agriculture, medicine and training. These are market niches where our companies could feel very confident. Today in Ukraine there are quite powerful scientific and educational schools, design organizations and industrial enterprises that could take leading positions in these industries. For this, it is necessary in the coming years, at least, to revive foreign trade policy and commercial diplomacy, and, as much as possible, to develop a system of incentives for the expansion of Ukrainian business.

We can earn much more in foreign markets than the income from the sale of goods and remittances from our migrant workers today. You just have to stop underestimating yourself and fearing the competition.

– What is the attitude towards Ukraine and Ukrainian companies among the African economic and political elite?

Good attitude. Many representatives of the authorities and the business world have studied and lived in Ukraine for several years of their lives. About a third of the African elite graduated from the universities of Kiev, Kharkiv, Odessa and Dnipro.

In fact, African countries today are faced with these development tasks, the solution of which was geared towards the scientific, educational, industrial and technical complex of Ukraine since the days of the Soviet Union. In this regard, and in all other factors, Africa can be our organic object of expansion and cooperation.

The Sendje Hydroelectric Power Station is a hydroelectric power station on the Vele River in mainland Equatorial Guinea, which will be the largest of all the country’s production capacities and will ensure an uninterrupted supply of electricity not only throughout Equatorial Guinea, but will also offer an opportunity to export electricity to neighboring countries. The construction is carried out by DUGLAS ALLIANCE LTD. commissioned by the government of the Republic of Equatorial Guinea. The main suppliers of hydraulic, electromechanical and lifting equipment were the French company Alstom (hereinafter the American company GE (General Electric)), as well as Ukrainian factories such as: “Master Profi”, “Dnipropress” and “l ‘Kharkiv-lifting plant and-transport equipment’. The project started in 2012, when the foundation stone was laid in the foundations of the future power station. In the fall of 2015, the Vele river was closed. 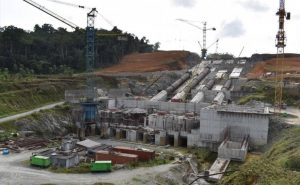 In 2016, the construction of the facility was suspended due to lack of funding from the Government of the REG and the resumption of work did not take place until July 2018. Since the resumption of construction of the CHE in Sendje, DUGLAS ALLIANCE LTD . carried out the installation of more than 1,100 tons of hydraulic and mechanical equipment, started the construction of the canal part of the concrete dam and the installation of a cement curtain, as well as drilling and blasting operations on the exit channel of the HPP building. Approximately 55,000 m3 of concrete was placed on all the main structures of the hydroelectric power station.